Consumer Reports is very informative. They test out different products and write up a review about them, the cool thing is they care about quality and not the brand name. I'd suggest this magazine if you frequently buy things and need to have a guide to inform you which product is the best. Sometimes the issues are filled with stuff that might not interest you, but don't give up because each month is different and overall its a very helpful magazine. This is one of those magazines where I keep the issues for a few months to refer back to when I am ready to make a purchase.

The kids and I got the suscription for my husband for Christmas last year. We both love it. I usually get the mail and most of the time read it first. The reveiws are great and easy to read. It's wonderful even if you don't plan on buying any big ticket items in the near future. We've used it for other people in our family that did need to purchase vaccume cleaners and the like. Wonderful. Excellent. I renewed.

Bottom line: worth the money

I've been a subscriber for about five years now. A couple of times, I've considered not renewing. Then I'll get an issue that seems to make the entire year's subscription worth it. Stuff like washing machines, new cars, computer monitors, even sunscreen. At a minimum, these truly independent reviews (the organization is non-profit and the magazine is ad-free) focus you on the pivotal issues regarding each product and provide questions to ask in making your purchase. At its best, it pretty much does your screening for you and all that's left for you to do is choose between 2 or 3 brands. I also have to admit I get a good chuckle out of the last page, where consumers have submitted ads or product descriptions that are either misleading or just erroneous. Every issue is not necessarily useful. I think it's ridiculous for them to review things like cereal or restaurants, which I feel are personal preferences, or detergents, which are pretty similar nowadays. But think about this magazine subscription as insurance against a bad purchase or as an investment that can pay you back several times over by saving you hundreds of dollars. Bottom line: it's worth the money.

A friend of mine once remarked that CR seesm like a great magazine "until they write about something you actually know a bit about..." and that's the problem with CR. They're great when it comes to quantifiable things like repair frequency, reliability, warranty information and so forth. They're much less useful when it comes to reporting on subjective things, or on technical matters.

That's a problem with trying to review every possible consumer item; you can't be an expert on everything. Sure, CR has their own labs and testers, but they're as likely as not, when confronted with something they can't quantify, to come up with some arbitrary measure and then rate products on that. For example, I've read some hilarious HiFi reviews that never involved actually *listening* to units. Instead, they take some statistic they consider to be critical and rate all units on that. Computer reviews often are very superficial- you'd do far, far better with PC or a similar magazine. And some of their financial advice on life insurance, mortgages and investment has been rather narrow, preaching single solutions for all.

So yeah, read CR when you're buying that next vacuum cleaner, or toaster, or popcorn popper, but before making any major purchasers or investments I'd look a bit further than the pages of CR. 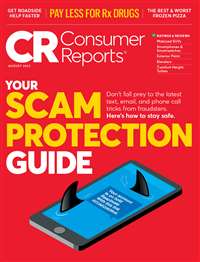